In 2013 it was advised to me that doing some exercise could help me with my mental health, the associated weight gain with my medications, and in general. Never did I imagine on that first run in 2013 did I think that 5 years later I would be walking up the same streets to the start line of The London Marathon. South East London has been my patch for almost a decade and in my lack of preparation for the marathon I didn’t know the route. I only saw it fully on some handouts at the expo, and my response was to think “oh wow, hmmm…” and proceed to not look at it again. I felt that having naivety on my side in regards to how long 26.2 miles really was was helpful. Sometimes, not knowing w hat you’re about to get yourself into can help diminish the pre-race anxieties of “shit, what have I just dove headfirst into”. This won’t work for everyone, but in this instance it worked well for me.

It was when I got off the bus with my Dad to walk up as it turned left onto Lee Terrace that the trip down memory lane began. Running up from the bottom towards Blackheath for the open space to run in was the initial plan when I started running. I got half way up before finding myself sitting, a flurried hot mess on the pathway up to blackheath and fervently googled “Why can I taste blood from running?” and “Why do my lungs burn so much from starting running?”. I sat there for a good while longer than I had been moving for and decided that I needed to take another route to exercise. I walked up to the grass on blackheath and decided to just move for 20 minutes with my music on. Cue, waving arms, and some jumping around, some dancing and just getting some movement into me. It was on the 3rd session of this that near marker 1. on the picture below that I tripped over a branch and found myself hobbling to A&E with a gash in my knee and needing stitches. When I say I NEVER thought 5 years ago in my clumsy attempts to get some exercise into my life that I would be walking those same routes and roads to The London Marathon start line. The moral of this story is, just move. Just get going in any way that feels right to you at the time. By starting, you never know where the journey will take you. Maybe it’ll take you to A&E in a wonder woman top needing stitches, or maybe it will take you to start lines, views and adventures you’ll never have guessed you would. Maybe, as in my case, it will lead to both. Don’t give up. 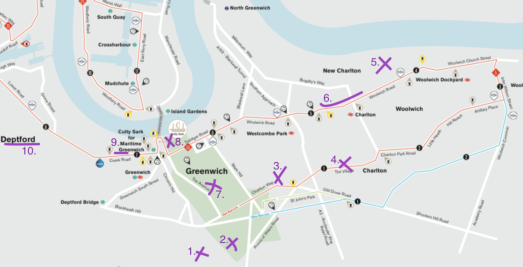 For the first 8 miles, the absolute privilege of running The London Marathon and it being on my patch really served as a distraction from the momentous task that was ahead of me. It was very cathartic to be running quite literally through memory lane, acknowledging the good and the bad memories.

I spent the majority of my head space during the first 8 miles reminiscing on my journey over the last 9 years in London. How this journey has shaped me, open my eyes, taught me brutal lessons, and saved my life. To the people of Lewisham, thank you. To the places that have brought me a lot of joy, purpose and good life lessons, like that people aren’t always mean or operating with ulterior motives, Thank You. Even the memory of my first mental health crisis that landed me in hospital, and the first time I got sectioned, without these experiences I would not be who I am today. From the bad good can come. This trip down memory lane felt like closure on some of those experiences and chapters in my life.

Mental illness can be brutal. Without these memories though, I wouldn’t be studying something I am so passionate about from these experiences. I wouldn’t be volunteering in community projects to help others on their journeys. I wouldn’t have had my eyes open to the importance of practicing non-judgmentalness. Some of these memories are difficult ones but sometimes it is exactly those difficult memories that are the most important for growing as a person.

The result? The first 8 miles were the most important for me. I really think this 8 miles of reflection time gave me the drive to bloody well enjoy the journey I was on to the finish line, be grateful for everything I have endured and survived and really just enjoy the pure act of being very alive that running is.

The rest of the markers and their associated milestones and memories are listed below:

This site uses Akismet to reduce spam. Learn how your comment data is processed.